UNP builds partnerships between the University of Utah and what is colloquially known as the “west side” of Salt Lake County. Specifically, our focus is on west side Salt Lake City and West Valley City, although because people, organizations, and issues move across political boundaries our partnerships often stretch outside of these areas. 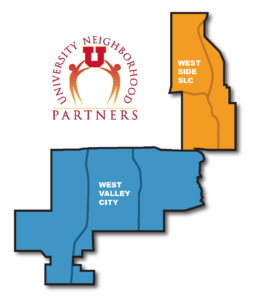 The west side was home to members of Shoshone and Ute tribes just prior to colonization.1 Native peoples were largely forced out of the valley by colonizers, and today 1.5% of Salt Lake County residents identify as Native American.2 Over the past century and a half, the west side has been the main entry point for immigrants to Utah from eastern Europe, Asia, Latin America, the Pacific Islands, Africa, and the Middle East, as well as for African Americans. These newcomers brought the many cultural practices, religions, architectures, organizations, businesses, passions, and dreams that have made west side neighborhoods the most racially and ethnically diverse in the state.3 The west side is also home to a stretch of the Jordan River, a rich natural resource that wends its way from Utah Lake to the Great Salt Lake.

The west side has faced a long history of political, racial, and economic marginalization. Since the late 19th century, west side residents worked in low-wage jobs and took the brunt of industrialization while being the last to receive public health and infrastructure upgrades.4 In the 1930s the west side was “redlined” by lenders and government officials. West side neighborhoods were deemed “definitely declining” or “hazardous,” and people in those areas were denied loans.5 In the 1960s, the construction of I-15 made concrete what was already a cultural border between the west side and its wealthier, whiter neighbors to the east.6 This legacy continues today, as is evidenced by east-west inequities in economic, health, and educational opportunities and resources.7 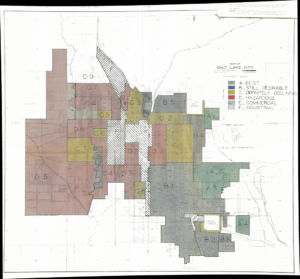 Within Salt Lake City, the west side includes the neighborhoods of Rose Park, Glendale, Westpointe, Fairpark, Poplar Grove, and People’s Freeway. These neighborhoods are primarily within the 84104 and 84116 zip codes and represented by City Council Districts 1 and 2. Today, the west side is home to several established community centers, nonprofits focusing on education and community development, well-known businesses like Red Iguana and Mestizo Coffee House, the West View community newspaper, cultural celebrations and summer outdoor events, and much more. Each neighborhood has a community council, recognized by the city to bring community voice to city decision making.

A large majority of west side Salt Lake City residents are people of color, with Hispanic/Latinx residents representing the largest group at 48%. The west side has a median household income of $49,000, compared to $74,000 for the state as a whole. 37% of adults are of low enough income to be eligible for Medicaid. Life expectancy is 75.2 and 77.7 for the south and north respectively, compared to 79.7 for the state as a whole. 71.3% have some education beyond a high school diploma or GED.8 In recent years, these neighborhoods have been facing gentrification, with rental and housing prices skyrocketing.9

West Valley City was incorporated in 1980, unifying parts of Granger, Hunter, and Chesterfield. For many, the city serves as a bedroom community. West Valley schools are part of the Granite School District, the largest district in the state. West Valley City is home to the Utah Cultural Celebrations Center, popular indoor swap meets, the Maverik Center, and other community institutions. A growing number of neighborhoods are involved in My Hometown, a city-led project that engages residents in community service.

West Valley City has a median household income of $85,672 in the western portion, $71,216 in the central portion, and $57,572 to the east. According to US Census data, 45.9% of residents are White (non-Hispanic), 40% Hispanic/Latino, 3.6% Native Hawaiian/Pacific Islander, 9% American Indian/Alaska Native, 2.7% Black/African American, 5% Asian, and 5.7% two or more races. 28.7% of adults are of low enough income to be eligible for Medicaid. Life expectancy averages around 77 years across regions, and 67.2% have some education beyond a high school diploma or GED.10 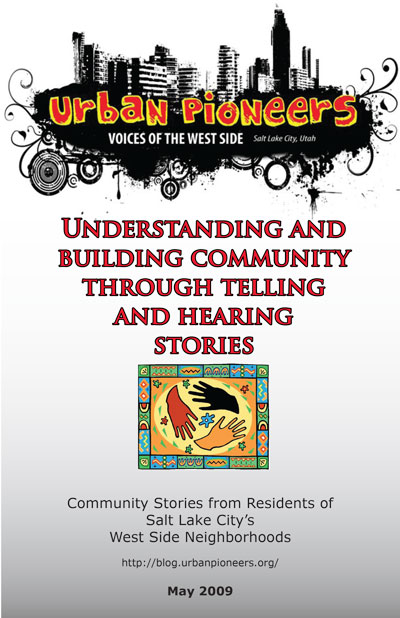 Voices of the West Side

What does building community mean in today’s society?