University Neighborhood Partners was born from Irene Fisher’s belief that Salt Lake City’s west side neighborhoods were an important part of the future for the University of Utah and Salt Lake City. Fortunately, then University president Bernie Machen supported that belief. After hundreds of conversations with residents and with people on campus including students, faculty, deans, and others, the University opened an office in the Glendale neighborhood. There was a great deal of support for this new department. Salt Lake City supported the endeavor by providing a free 10-year lease on a building near Jordan Park, and Intermountain Healthcare provided funding to renovate it. An advisory board of various stakeholders was formed, residents came forth to serve as Community Ambassadors, and area organizations were enthusiastic to become partners with a shared purpose. 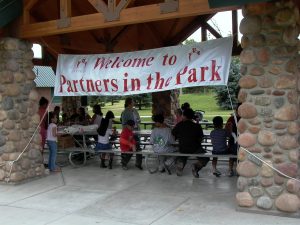 After the open house event we wanted to let people know we were here and why we were here. The parks are among the many great assets in these neighborhoods and they provided the perfect venue to reach out to people, so in 2003 the first series of Partners in the Park events happened. That summer there was an event almost every Tuesday night!

That year a local organization and a University department would team up to co-sponsor each event, providing activities, organization, and food for the evening. For example, the Athletics department joined up with Neighborhood House. University athletes helped run activities which included a 4-way tug of war. The partners also provided prizes for those who joined in the fun. That year more than 20 groups partnered to make the events happen. A few community councils also joined in to combine Partners in the Park with National Night Out, so three events were held that night! Much of this was coordinated by an AmeriCorps Vista worker who made phone calls, sent correspondence, and tracked data. That data would inform us on how to proceed for future events. It also indicated that people were thrilled with the events and wanted to see it become an annual event. 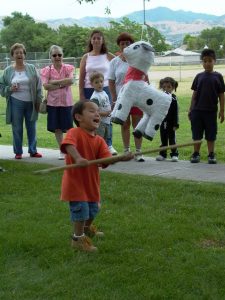 er, attendance ranged between 50 – 100 people each evening. In 2017, the smallest event had over 300 people, while the biggest had nearly 600 attend. Much has changed over the years but the overarching purposes remain the same. Among these are connecting with residents, involving different university departments, providing a fun social and family experience, celebrating partnerships, valuing our diversity, and sharing resources and knowledge.

Also of importance is inclusiveness. Flyers were provided in both English and Spanish after the first year, and sometimes we’ve even had them in Somali and Arabic. Food offerings are diverse from event to event, never contain pork, and includes something that vegetarians can eat. For LDS households Monday evenings are traditionally reserved for family time at home which helped make Tuesday nights the choice for these events. The time has been adjusted, as has the frequency of events. Activities have included piñatas, bands, small games, bingo, craft projects, and more. Resources have included information, small workshops, giveaways, and small health clinic services.

Partners in the Park has become a signature event for University Neighborhood Partners. There are 5 events held each summer at different parks across the west side neighborhoods. UNP has taken on more of the strategic operation of the events, in part due to permitting and planning, but we still have significant support from the Alumni Association, Career Services, Health Sciences, and other University departments. Rocky Mounta 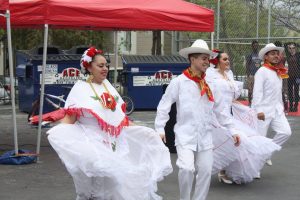 in Power, Salt Lake City, Salt Lake County, and Smith’s also provide ongoing support to sustain the events. A group of volunteers known as Community Advocates, have been essential to Partners in the Park and work very hard to make sure things run smoothly. It will be exciting to see how these events evolve over the next 15 years.